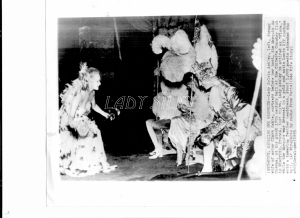 As Halloween approaches, I am reminded not only of the princess costumes and pillow cases full of candy from my childhood, but also of the distant past, of All Hallow’s Eve. Originally, it was celebrated with bonfires and costumes of decoy to ward off spirits who traveled from the other world back to this one. Getups were worn in order to camouflage oneself and to confuse the spirits so as not to be haunted. Somehow it has morphed into becoming someone else: a character or a celebrity, like roll playing.

It’s a subtle shift, but it seems to have bled some of the creativity out of the celebration. Now prefabricated, prepackaged outfits like super heroes or sexy pirates or imitating a well-known person as vapid as a Kardashian is the goal. It’s rare to see something as avant garde as a Picasso painting or as imaginative as a season.

Playing dress up was also not limited to just one evening annually. For most of the 20th century, costume balls and themed parties were common throughout the year. Revelers from the past came up with occasions such as New Year’s Eve and birthdays to don the vestiges of alter egos–the chance to be somebody or something else for a night.

This week’s post shows Silky curtsying as “Flora” for the Marquis de Cuevas (dressed as Louis XIV) at a ball in France in the 1950s. It was reported that a thousand guests attended the soiree, all dressed in costume…in September! I think it’s time to get out my lederhosen!