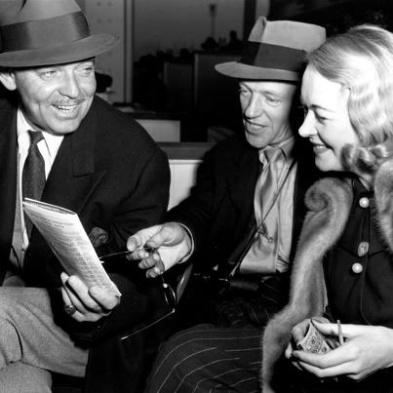 Silky with Clark Gable and Fred Astaire at the races, 1950

My writers group met recently for our monthly critique and I was startled to discover the writing habits of my fellow members. All three of them admitted to writing EVERY SINGLE DAY! Now, it’s not that this is exactly news—every workshop, class and conference I’ve ever attended has advised a daily writing practice. Every successful writer I’ve heard lecture has said the same thing.

The other writers in my group all have busy lives just like I do. Two of them have partners, one has teenaged kids, all of them have demanding jobs. And yet they write every day. One gets up at five o’clock in the morning before his family’s awake, before he has to be at work. One uses her lunch hour and eats at her desk while working on her second novel. So what’s my problem?!

I find it difficult to move away from the physical world and isolate the way writing requires. And I feel overwhelmed by life’s demands. I tell myself as soon and I get through this or finish that, I’ll focus on my writing. But that’s simply an excuse. Something’s always going to come up—that’s just life. Commitment is what is takes to write. Period. It’s like a muscle & has to be exercised. You just have to make it part of your routine—a habit. That requires discipline. Not my strong suit. But I’m the only one harmed by my indolence and languor.

My goal when I began fourteen years ago was to tell this incredible woman’s story. Enough pussyfooting around–time to get back in the race. Ladies and gentlemen, place your bets… 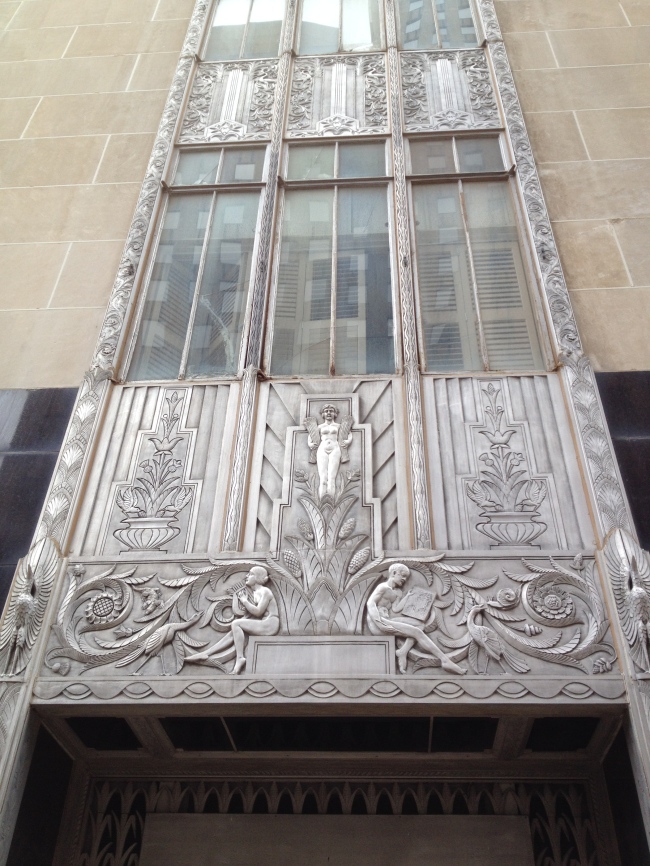 I just returned from a business trip to Oklahoma City. Like many mid-western towns, much of its design and development took place during the post-depression era of F.D.R.’s New Deal. Roosevelt’s Works Progress Administration (WPA) employed not only contractors and workers but also artists and architects from 1933-1936 when Art Deco was at its peak. Fortunately, much of the development that took place was the construction of public buildings like courthouses, postal facilities, schools and government offices—buildings that stand to this day. Many privately owned hotels—like the Waldorf-Astoria in Manhattan–adopted these modern design elements, but sadly, most of the hotels have been demolished as both the styles changed and the properties changed hands. 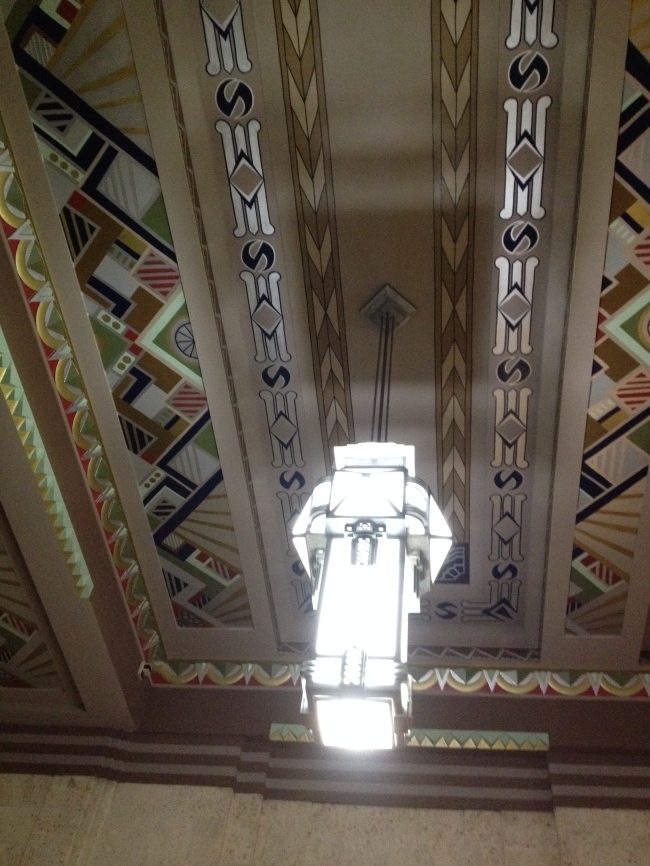 I stayed at the Colcord Hotel, built in 1910 as Oklahoma City’s first skyscraper at twelve stories. Its geometric details in the lobby’s metalwork and fixtures hint at an Art Deco future. Walking downtown, I discovered the First National Bank Building from 1931 with its polished aluminum details and shiny black marble accents. The clock jutting out over the corner at Park Avenue reminds me of a vintage watch I used to own. 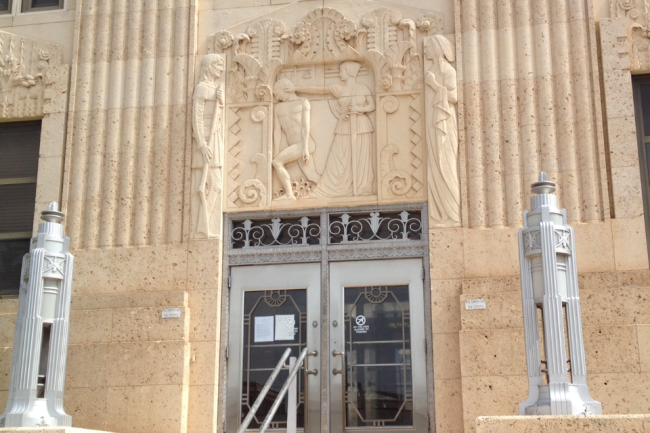 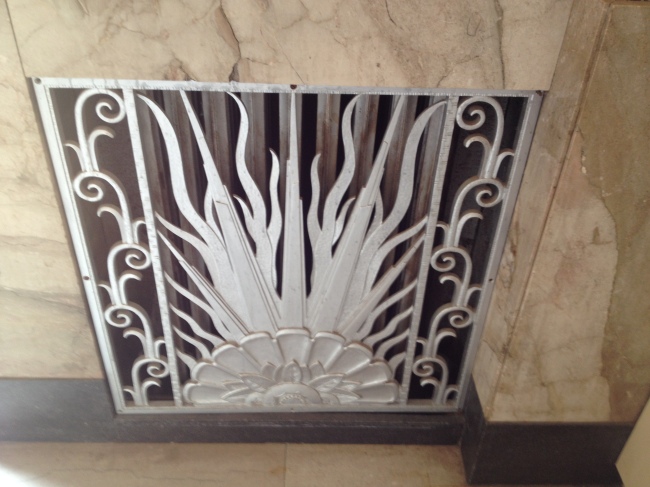 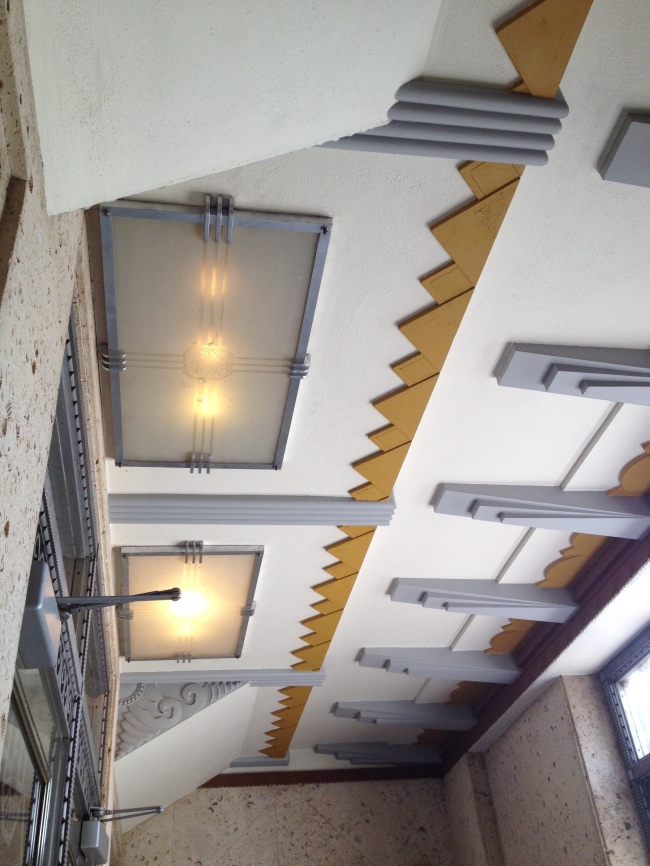 The Santa Fe train station in downtown Oklahoma City was opened in 1934 as was the Grady County Courthouse in Chickasha—both of which I was able to experience on this trip. The boxy, subtly chiseled exteriors of the two buildings only hint at the glorious Art Deco features to be revealed upon entry. Everywhere one finds the Neoclassical elements like chevrons, fiddle-harp ferns and Grecian-style figures. Walls, doorways, floors, windows, ceilings and fixtures are a dizzying array of sumptuously streamlined modernity. As usual, when I am surrounded by this sort of visual elegance I think of Silky. She was the epitome of her era: sleek, graceful, classic and modern. 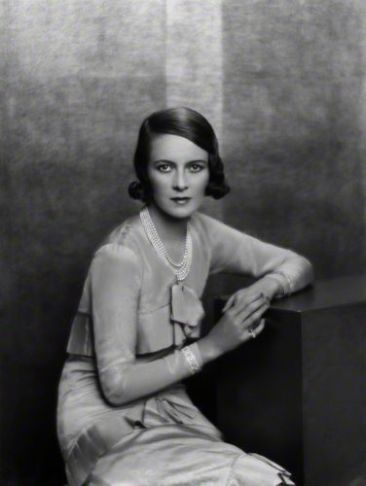 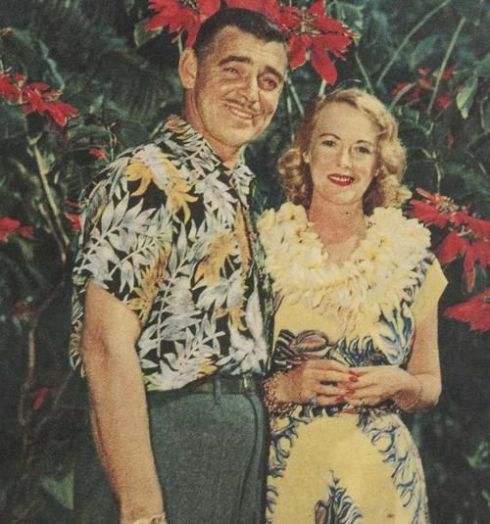 Clark Gable and Lady Sylvia Ashley on their Hawaiian honeymoon, 1949

One of the most beautiful aspects of life at “a certain age” is coming into a kind of confident focus. I find that I am less easily flustered on a daily basis and there’s precious little that really bothers me in my little realm (baring global warming, cruelty to animals and the like). And most glorious: I don’t really care much about what anyone else thinks of me. Oh, the freedom, the release!

It used to take me hours to prepare for a party or an outing. I would try on a myriad of outfits trying to produce the perfect one that would be flattering and stylish, giving me the self-esteem I lacked. I’d catch myself not saying many of the things that went through my mind in conversation for fear it might be inappropriate, not witty enough or misconstrued.

But more recently, I have morphed into that woman who wears whatever makes her happy and has no filter, sometimes saying wildly misunderstood and slightly unsuitable things to complete strangers. I just simply can’t be bothered anymore. And I’m having a blast!

I suppose when you realize you’re at the halfway point on this journey, it’s a kind of wake up call. Life is a limited engagement. When you’re young and just starting, it’s all stretched out before you so vast and limitless and full of possibility. But when the sands in the hourglass start to balance, you realize you’d better make the last half count, that there is a finish line to this marathon.

I think Silky understood the concept of a woman’s expiration date, especially since attracting a man was her goal. She took great pains to remain alluring and successfully snagged the bachelor of her era, Clark Gable, in her forties. I enjoy keeping fit and being active, dressing well (most of the time). But it’s because it gives ME pleasure to take pride in my appearance. It’s not for anybody else, although I do enjoy the male attention it gets me.

We live in a consumer culture that worships our youth because they lack discernment and can be sold to more easily. But once a person reaches a certain point in their lives, they’ve seen enough to know what really matters…and it’s not a new car or what so and so wore to a party or the latest celebrity gossip (although those things can be quite entertaining). Our culture’s version of “sexy and hot” are trendy and fleeting, designed for consumption. In my travels through this mortal coil, I’ve come to realize that connectedness and generosity are the fashions I follow. And that the sexiest, most attractive trait in another human being is kindness.