What a glorious summer we’ve been having in Santa Barbara. They may be having a record-breaking heat wave in the east, but we’ve got sunny blue skies and gentle breezes, the temperature hovering in the seventies. Blissful.

This post’s photograph is Silky enjoying warm weather on the Lido in Venice in August of 1935. It’s my only bathing suit shot of her. It was taken before the divorce scandal, when she and Doug were traveling the world and enjoying their fresh romance.

It looks as though she is holding her sunglasses and is either about to jump in the little boat or has just gotten out of it. Either way, her toenails are painted a perfect vivid red and she seems quite relaxed. I would be too if I were vacationing on the beach in Italy with the love of my life!

By plane, by boat, by train or car…I need a vacation! This week I reunited with a friend from high school. Marty and I met Nancy in senior year at Pali High. This summer she’s traveling between her home in Seattle and her birthplace, with many stops along the way. It sounded like a grand adventure.

We met at the historic El Coyote Restaurant for dinner and margaritas after nearly twenty years. Maybe it’s not as glamorous a spot as Silky would have frequented, but it would have been around when she lived in the Palisades.

Nancy’s stories of travel only reinforced how desperately I need a vacation. Which is probably why I chose these photos for today’s blog. Sylvia is in transit in both.

She and Doug traveled home to the states from London by ocean liner at the onset of World War II, bringing Sylvia’s sister Vera and her two children with them. That massive mastiff is Doug’s best friend, Polo. He howled like a siren when Doug died.

The other photo is Silky by herself debarking an American Airlines plane sometime after Doug’s death, since they call her his widow. Though it doesn’t give a date, I’d guess it’s somewhere in the early 1940s by the look of those shoulder pads.

Silky saw the world and I’d sincerely like to continue to travel in her footsteps…anywhere.

In the theater, when the show is down and there aren’t any performances it’s referred to as “dark” days. My blog has seen a week of dark days, without a single entry.

I got my first rejection from an agent last week. I’ve been receiving them since April from agents who I simply queried and who rejected my idea. But this was an agent who asked for the complete manuscript, read it and then passed. It really threw me.

In retrospect, I suppose it was naïve of me to think that the very first agent to ever read my book would want to represent me, but that’s kind of what I did. It’s not that I think I’m such a fine and accomplished writer, I just can’t believe everyone doesn’t find Silky as glamorous and fascinating as I do. I’ve always felt that her phenomenal life was ripe for publishing and if I could simply do it justice in the telling, then naturally it would be a huge success. And I still feel that way. But there were a few days there where I wasn’t strong enough to get back up on the horse.

I’ll admit, I was wallowing and licking my wounds. I went on the downward spiral of fear and doubt, wondering what the last eleven years of my life have been for. Luckily that gets really boring, really fast. And life marches on.

This post’s photo is of Sylvia during one of her major disappointments. She is returning home from Hawaii after her split with Clark Gable. Her sister Vera and nephew Timothy are with her; they met the ship on Silky’s arrival.

She is wearing gloves and dark glasses. Gone are the flats she wore throughout her highly publicized marriage to the aging Rhett Butler. My guess is that it was probably to make Gable appear taller. But she’s back in high heels–my favorite part of this photograph.

Silky saw some dark days and wallowed a little, to be sure, but she got back up on the horse and went on to marry a fifth time. The show must go on. I’m finally ready to follow her lead and shine a little light on my own dark days. Now where did I put those heeled sandals? 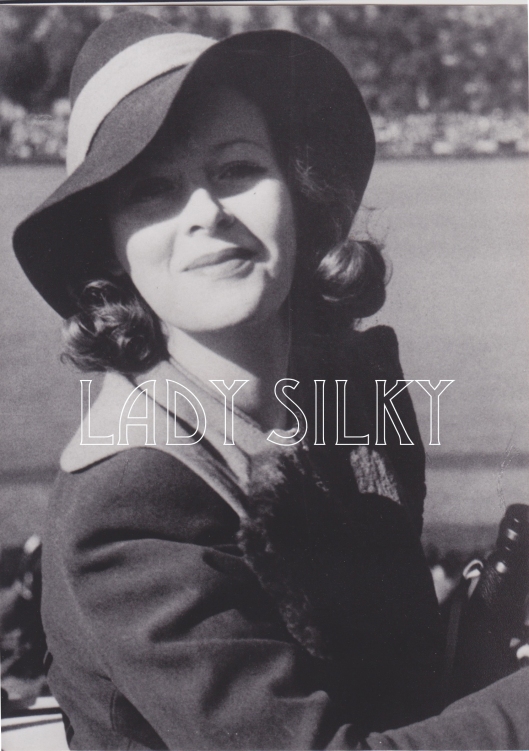 Since my last post about the DVD of Sylvia with Gable in Hawaii and with Doug at the races, I’ve been looking at my photo collection and discovered several stills of Sylvia at the track. It seems she rather enjoyed horse racing.

There are two where she’s in a group. One is a copy given to me by Keri Leigh of the Fairbanks Museum with Silky, Doug and the Plunketts from the 1930s. And the other went up for auction on eBay but quickly shot out of my price range, due to the fact that Sylvia and Doug were in a group that included Mr. And Mrs. Jack Warner and Marlene Dietrich.

The two I own are both of Sylvia by herself—one younger and one older. In the older shot, she’s got a cigarette holder in one hand and some sort of furry creature on her lap. She looks hot and I remember Miami to be insanely humid. The Associated Press caption says it was taken in February of 1949 at Hialeah Park Race Track and calls her the former Mrs. Douglas Fairbanks. It ran again on December 21st, 1949 when she became the fourth wife of Clark Gable.

I got the younger shot of her at the races from my uncle, Gene. She’s smiling into the camera, the shadow of her hat shading her eyes. Her clothing places it somewhere in the 1930s. The look on her face leads me to believe she knew the photographer and that it was a snapshot taken by someone intimate, not a professional. It could have been Fairbanks or perhaps her lover, racecar driver Tim Birkin.

I found the negative in Gene’s belongings after he died in December 2001. I was creating a photo collage for his funeral and ran onto it in the bottom of a box of pictures and postcards. He used it in an ad that I found at the Academy Library for his restaurant, Stratton’s Grill in the 1980s. In it he told a short story about his travels with Sylvia in Paris and the South of France. It was the only trace of her I could find from their long friendship.